This symposium also has established itself in the national scientific calendar as an important scientific-technical event in the software area. Its first edition took place in 1998, going for its 19th edition in 2016.

The SBMF event is devoted to the dissemination of the development and use of formal methods for the construction and verification of computer systems, aiming to promote opportunities for researchers with interests in formal methods to discuss recent advances in the area.

SBMF 2016 will include the following specific activities:

Augusto Sampaio is a graduate of Centro de Informática (CIn) at Universidade Federal de Pernambuco (UFPE) (BSc 1985 and MSc 1988) and Oxford PhD, 1993. He is a Full Professor at CIn-UFPE; his main research subject is Software Engineering with emphasis on Formal Methods. He is currently the Head of the Computer Science Department of CIn-UFPE and the Coordinator for Industry-Academia Cooperation. In 2010 he received the title of Comendador da Ordem Nacional do Mérito Científico (Commander of the National Order of Scientific Merit) awarded by the Brazilian Presidency. He has coordinated several national and international projects, including three projects jointly funded by NSF (USA) and CNPq (Brazil). More recently, he was the Brazilian Principal Investigator of the COMPASS project (http://www.compass-research.eu), funded by the European Commission under an FP7 call. He has also significantly focused on cooperation with industry: particularly, since 2002 he is the PI of a long term collaboration with Motorola, on the development and application of formal testing and analysis techniques to mobile phone applications. Augusto Sampaio has had a major role in the conception and implementation of a novel educational programme that is now widely known in Brazil as Software Residency.

Prof. Dr. Michael Leuschel (male) is Professor for Computer Science at the University of Düsseldorf where he heads the "programming languages and software engineering" group. In addition, he is Co-Founder and Chief Scientific Officer at Formal Mind. He has developed the ProB toolset for the validation of B specifications. Outside of formal methods, his main research areas are automatic program analysis and optimization (notably partial evaluation and abstract interpretation). He was awarded the IBM International Chair 1999 on Modelling and Optimization. He was the program chair of ICLP,2014, LOPSTR'02, PEPM'03, FMCO'09 and iFM'09, the symposium chair of PPDP'07, and is a member of the PEPM and LOPSTR steering committees and of the editorial board of the Journal of Theory and Practice of Logic Programming. He has published over 130 papers and developed several tools, such as the ECCE and LOGEN partial evaluation systems. He has been involved in several EU projects (Advance, Deploy, ASAP, PyPy, RODIN, POST) and the Eureka Eurostars project PyJIT.

SBMF 2016 is the nineteenth of a series of events devoted to the development, dissemination and use of formal methods for the construction of high-quality computational systems. It is now a well-established event, with an international reputation.

SBMF 2016 will take place in Natal, the capital of the state Rio Grande do Norte, that is located in the northeast region in Brazil. Natal is a portal of entry to South America: near to the point closest to Europe and Africa. Natal is a modern and lively town that emerged between a river and the sea; it is adorned by dunes and lots of green areas: a land of colours and flavours, where you find leisure and adventure. In Natal, it is Summer all year round, in a unique coastline of breathtaking beaches, lakes, wilderness, culinary, tours, art and culture, together with the great natural hospitality of its people.

Natal is one of the most popular tourist destinations in the world. It has around 800,000 inhabitants and receives more than 2 million / year tourists from Brazil and abroad. Visitors are dazzled by more than 400 km of Atlantic Coast strolling through beautiful beaches, many of which visited in thrilling buggy rides between sea, dunes and lagoons. It is known as the "Sun City", and is also remembered as "World Buggy Capital" and "Land of Shrimp". Natal is the city where a brazilian dance, called Forró - "For All" - was born.

The aim of SBMF is to provide a venue for the presentation and discussion of high-quality work in formal methods. The topics include, but are not limited to, the following:

Papers with a strong emphasis on Formal Methods, whether practical or theoretical, are invited for submission. They should present unpublished and original work that has a clear contribution to the state of the art on the theory and practice of formal methods. They should not be simultaneously submitted elsewhere.

Papers will be judged by at least three reviewers on the basis of originality, relevance, technical soundness and presentation quality and should contain sound theoretical or practical results. Industry papers should emphasize practical application of formal methods or report on open challenges.

Contributions should be written in English and be prepared using Springer's Lecture Notes in Computer Science (LNCS) format. Papers may not exceed 16 pages (including figures, references and appendix). Accepted papers will be published, after the conference, in a volume of LNCS.

Every accepted paper MUST have at least one author registered in the symposium by the time the camera-ready copy is submitted; the registered author is also expected to attend the symposium and present the paper.

Papers can be submitted via the following link: https://easychair.org/conferences/?conf=sbmf2016

The free access for conference-participants will be granted for 4 weeks.

The School of Theoretical Computer Science and Formal Methods (ETMF 2016) is a joint promotion of Federal University of Pelotas (UFPEL) and Federal University of Rio Grande do Norte (UFRN). The school aims to bring together students and researchers to disseminate and promote theoretical aspects of computing. The oficial language of the ETMF 2016 will be portuguese. More information is available here (in portuguese).

This is a gateway to Brazilian Computer Society's Web-based registration system (ECOS). From here, you can access the ECOS main web page, where you can choose either the Portuguese interface or the English interface.

We expect that at least one author of each accepted paper registers to the conference.

We have postponed the deadline for Early Registration. 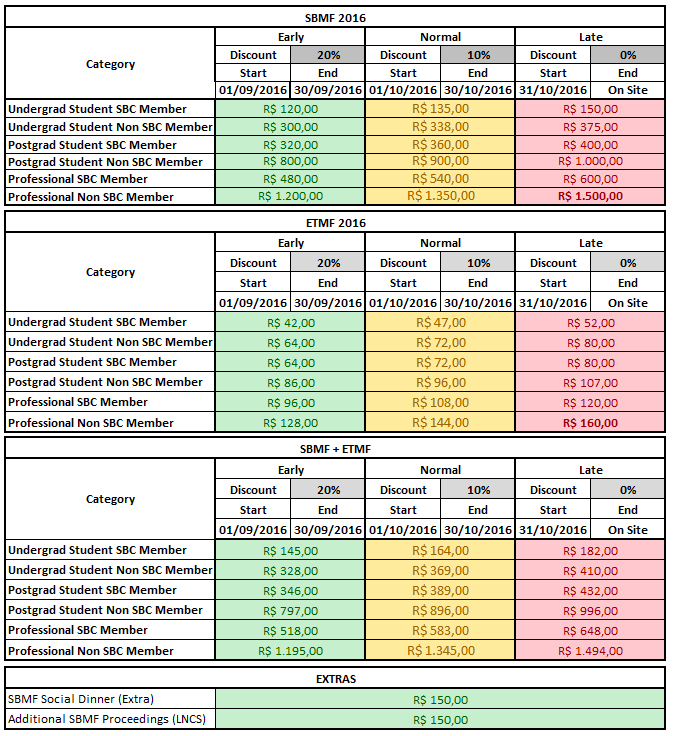 Registrations may only be cancelled until the 07th of November, 2016. In such cases, only 50% of the registration fee will be refunded. The remaining 50% will not be refunded because they will cover administrative costs.

SBMF 2016 will take place at the Metrópole Digital Institute (IMD). 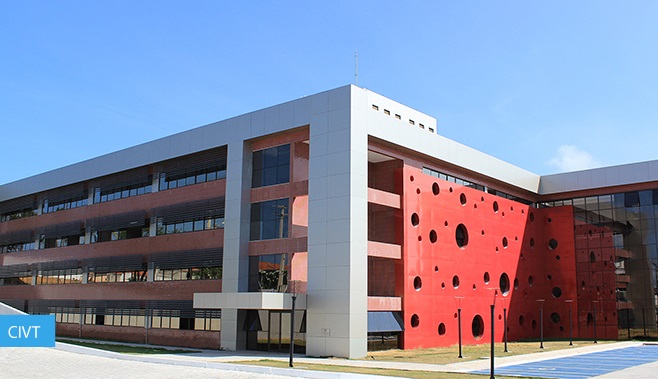 The building is located at the Federal University of Rio Grande do Norte (UFRN), which is right on Senador Salgado Filho avenue (BR-101). You can find it in the map below:

Currency Exchange: Currency change agencies are available at the airport and in several touristic and shopping areas. You will need to bring your passport to do the transaction (but since you are supposed to carry your passport with you, this should not be a problem).

Electricity Adapters: Brazil is a bi-volt country (110V and 220V), and Natal is a 220V area, and it is very easy to find here voltage converters. Frequency is 60Hz. Since 2011 Brazil uses a plug pattern named NBR 14136, which is only used here. Although some flat blade plugs work well, worth searching on this pattern.

Language: The official language of Brazil is Portuguese. If you speak spanish, you may be able to communicate without too much difficulties with most people. As Natal has received an increasing number of foreign tourists in the last few years from a variety of different countries, more and more people are trained to work with foreign visitors. Hence, some people on restaurants, shops, and taxis speak English.

Financial information: The brazilian currency is the Real (plural: Reais, abbreviation: BRL). At the date of this writing, 1USD = 3,96BRL and 1EUR = 4,36BRL. Most shops, restaurants and hotels accept Visa or Mastercard. You can also change quite easily several foreign currencies (mainly US dollar, Euro, Scandinavian currencies, British pound) to Reais. Prices are cheaper than in Europe or than in North-America, especially in the services industry as the cost of labor is much lower.

Weather: As Natal is located only 5 degrees south of the equator, the population enjoys year-long mild (22C) to hot (35C) temperatures. A constant breeze from the ocean tricks people into forgetting that the sun is very strong. The incidence of UV rays is one of the highest of Brazil and it is strongly recommended to avoid sun-bathing during the hours of the technical session!

In this section you can find some interesting videos about Natal and other nearby cities (most of them in portuguese). We hope you enjoy your stay here!

Airports: The only major airport in the State of Rio Grande do Norte is Aeroporto Internacional Governador Aluízio Alves, in São Gonçalo do Amarante, about 25 km from downtown Natal. It was opened on May 31, 2014 and this airport is considered the best in Brazil in its category. Natal is not a major hub. There are a few direct flights to Natal from other major Brazilian state capitals but many flights have a connection in Recife or Salvador. In the past few years, Natal also become the destination of an increasing number of direct flights from Europe: regular flights from Lisbon and charter flights from several european countries (Germany, Great Britain, Italy, Netherlands, Norway, Portugal, Spain, Sweden).

Important information: Direct flights from Europe to Natal have a very high level of occupancy. It is wise to make early reservation in order to guarantee your seat on such flights (at least, you will get cheapest fares).

Buses: The main bus station of Natal is Rodoviária de Natal. There are buses to and fro, all major cities in northeast. Distances: João Pessoa: 180 km; Recife: 288 km; Fortaleza: 533 km.

Check out these bus companies:

Touristic destinations - Extend your stay for a few days and discover some of the following activities:

Please note - we recommend you bring the following items: sunscreen, sunglasses, a swimsuit, sandals, and hiking boots or tennis shoes.

Harabello Viagens e Turismo is the official travel agency of SBMF 2016. Click on the logo below to access their website where you can book accommodation, flight tickets, transfers and touristic tours.

Natal has a great variety of restaurants: steak houses, seafood, pizzerias, sushi, etc. Here you can find a list of them: